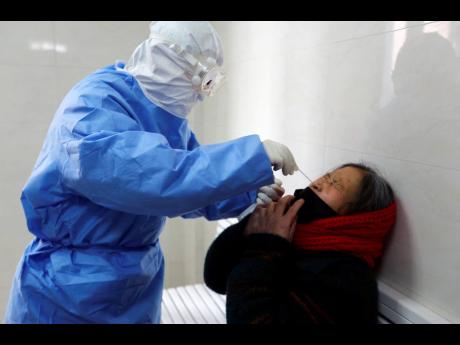 A doctor takes a swab from a woman to test for the COVID-19 virus at a fever clinic in Yinan county in eastern China’s Shandong province on Wednesday.

BEIJING (AP) – The number of new cases of the coronavirus in China dropped for a second straight day.

Health officials said Wednesday in a possible glimmer of hope amid the outbreak that has infected more than 45,000 people worldwide and killed more than 1,100.

Dr Mike Ryan, the head of emergencies for the World Health Organization, said it is “way too early to try to predict the beginning of the end” of the crisis in China.

China has locked down an unprecedented 60 million people in an effort to curb the spread of the virus, which has hit hardest in the city of Wuhan and surrounding Hubei province.

GRAND RAPIDS, Michigan (AP) – A white woman who used racial slurs as she attacked a black car salesman at a western Michigan dealership has avoided jail, despite a tearful appeal from the victim for her to be given behind bars.

Judge Paul Sullivan on Tuesday sentenced Shelly Hueckel of Nashville, Michigan, to two years of probation. Hueckel was convicted in December of misdemeanour assault but cleared of ethnic intimidation, a felony.

Before the Kent County judge handed down Hueckel’s punishment, Terrence Smith tearfully asked that the maximum sentence be imposed.

The misdemeanour conviction is punishable by up to 93 days in jail.

Hueckel allegedly struck Smith repeatedly, knocking off his glasses while shouting racial slurs. Hueckel apologised in court. If she violates the terms of her probation she could serve up to 45 days in jail.

Selina Soule, a senior at Glastonbury High School, Chelsea Mitchell, a senior at Canton High School and Alanna Smith, a sophomore at Danbury High School are represented by the conservative non-profit organisation Alliance Defending Freedom. They argue that allowing athletes with male anatomy to compete has deprived them of track titles and scholarship opportunities.

The lawsuit was filed against the Connecticut Association of Schools-Connecticut Interscholastic Athletic Conference and the boards of education in Bloomfield, Cromwell, Glastonbury, Canton and Danbury.

NEW YORK (AP) – Incidents of white supremacist propaganda distributed across the nation jumped by more than 120 per cent between 2018 and last year, according to the Anti-Defamation League.

This made 2019 the second straight year that the circulation of propaganda material has more than doubled.

The Anti-Defamation League’s Center on Extremism reported 2,713 cases of circulated propaganda by white supremacist groups, including flyers, posters and banners, compared with 1,214 cases in 2018.

The sharp rise in cases of the propaganda distribution last year follows a jump of more than 180 per cent between 2017, the first year that the Anti-Defamation League tracked material distribution, and 2018.