Cop mowed down by taxi to undergo surgery today 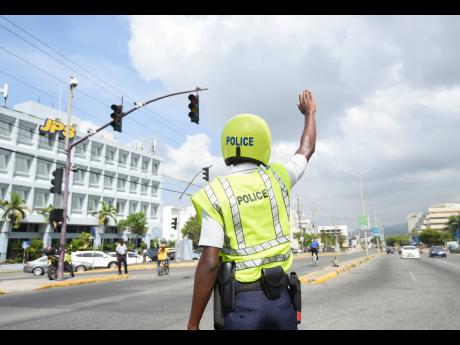 The constable who was run over by a taxi driver yesterday morning, is expected to undergo surgery today.

Yesterday, Deputy Superintendent of Police Dahlia Garrick told THE WEEKEND STAR that he was scheduled to undergo surgery "within the next 12 to 18 hours."

The policeman was conducting traffic management duties at the intersection of Worthington Avenue and Trafalgar Road in New Kingston at approximately 7:45 a.m. when he signalled the driver to stop.

The driver sped up, hit the cop, who fell to the ground, and ran over his leg.

Up to press time, the search was still on for the driver of the black Toyota Wish motor car, licensed PJ 6379. The vehicle was found last night on Mountain View Avenue.

"We continue to appeal to him (taxi driver) to turn himself in to the police immediately. We encourage persons to share whatever information they have about the driver of this car," said Garrick. "We have been getting several leads that we are pursuing. We have carried out some inquiries around some of them and we intend to act on all the information that we are provided with, and that includes information what we have garnered ourselves."

She further explained that she did not think the occupants of the vehicle would be charged.

"Normally, you're charged with aiding and abetting when you assist in any way or form with the commission of an act. In this case, from what has happened, unless investigations confirm that any passenger or anyone had a direct involvement in the commission of the incident, then I don't think they will be charged," she said. "Being a public passenger vehicle, you would have been travelling in it for a particular reason ... that is reaching a destination."