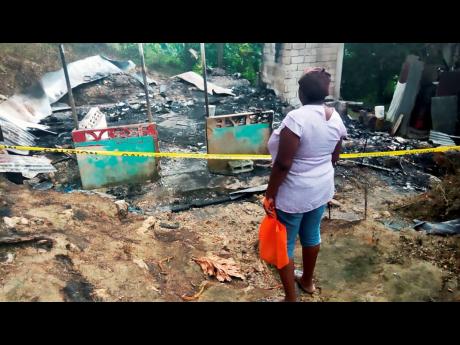 A retired St James farmer who allegedly set his house on fire in a failed bid to kill his own daughter, ended up being the only person to perish.

The dead man has been identified as 75-year-old-year-old Ewan Thorpe, who occupied the residence with his adult children.

According to police reports, at about 3 a.m. on Thursday, the deceased man's son, Winston Thorpe, was awoken from his sleep by intense heat. He subsequently saw fire coming from underneath his room door.

The frightened man shouted out to his 50-year-old sister Judette Thorpe, that the house was on fire, but when she tried to open her door, she discovered that it was bolted from the outside.

Her brother then ran outside the house and smashed a window to her room and instructed her to jump to safety.

After rescuing his sister, the brother began shouting out to his father but he got no response.

Firefighters, who responded to the blaze, found the charred remains of the elderly man in the house.

going to kill her

A resident told THE STAR that before the incident, the retired farmer was seen with gasolene and when quizzed as to what he needed it for, he stated that he planned to kill his daughter.

"A Wednesday mi si him wid a plastic bottle wid liquid what resemble gas and him a tell mi seh him can't tek him daughter no more and that him was going to kill her and then kill himself," the man recalled.

When THE STAR spoke to Clarke's daughter, she said she had heard rumours that her father wanted to kill her but was not convinced he would actually do it, since he wasn't a bad person.

"I heard people in the community saying my father wanted to kill me, but I cannot say for certain, because that is just what people said. My father was not a bad person, but since the passing of my mother three years ago, he had been acting very strange at times," the daughter said.