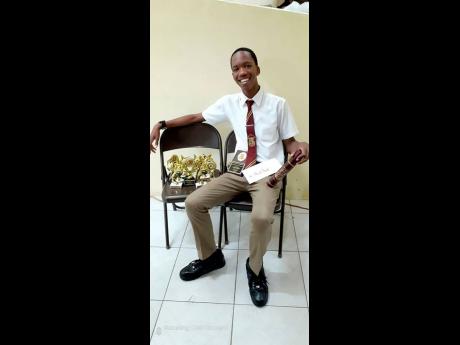 For the past four years, Alrick Powell, a student of Dinthill High School in St Catherine, has had to live with the fact of his father, with whom he share a very close relationship, being in a vegetative state.

This resulted from the elder Powell developing complications after undergoing surgery. His father is still hospitalised.

Alrick is now in his first year in sixth form at Dinthill.

"My father and I were extremely close ... . He was very protective of me; he wouldn't let me go anywhere without supervision," he said in an interview with JIS News.

Alrick says it has been extremely difficult coping with his father's condition, which, along with other factors, resulted in him not making the honour roll while in fifth form. Prior to that, he had been an honour roll student since grade seven.

"It was rough. There have been times when I wanted to cry, but I couldn't allow the situation to distract me from going after my goal, which was to succeed in my exams.

"I tried my best not to focus on the fact that he has brain damage but that he is still alive and can hear of my achievements; so I wanted to make him proud," he added.

The Linstead, St Catherine resident said that when he sat the exams, all that was on his mind was acing those tests so that he could bring some joy to his mother and good news for his father.

"I wanted to ensure that after doing the exam, there would be a smile on my mother's face, and I wanted to make sure that she had something good to report to my father when she went to visit him," he said.