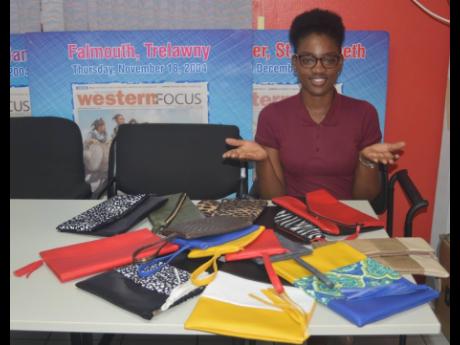 Entrepreneur Sashalyn Haye showcases the various styles and designs she offers in her Khandhor’s Kweenz business.

The 23-year-old Haye told WESTERN STAR that her home-based business in which she designs and builds custom-made clutches, wristlet-bags and purses started out of a crisis situation.

"My sister was very ill and unable to work. As a result of the illness, she lost her job, and I was the one she depended on the most for assistance. But I was going to school and working a nine-to-five job, and it just wasn't going to be enough to take care of her, me, and my bills," said Haye, who is currently pursuing a degree in integrated marketing and communication at The University of the West Indies.

Haye eventually got the idea to experiment with making purses, and she bought a sewing machine and the materials she would need to do the work.

"We posted on April 9, and my first sale was April 11, and I sold three bags that day."

Since then, Haye has sold close to 100 bags, with emphasis on tailoring to the customer's needs.

"If a person wants to make an order for a personalised item, the cost depends on what they want and the fabric I would have to use. The most expensive clutch-bag is $3,000 and the cheapest is $2,000,"Haye said.

"Females usually have problems finding purses to match their shoes, especially in colour or style, and I just fill that gap," she said.