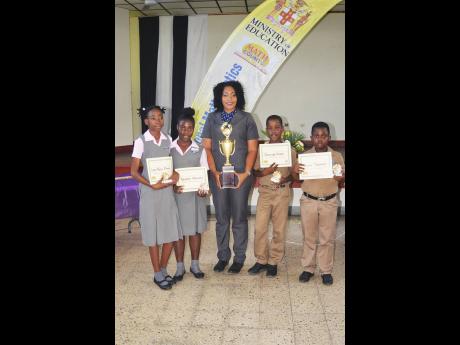 Irwin Primary School in St James is in celebration mode after winning the Ministry of Education Region Four 2019 Mathematics Quiz Competition, which concluded at the Calvary Baptist Church in Montego Bay last Tuesday.

During the competition's third annual staging, which began on January 17, the members of Irwin Primary's student team faced off against 15 other schools.

Irwin eventually defeated Flankers Primary School in a close and climactic final, which ended 13 to seven.

As with the other matches in the competition, the final was modelled after the popular Schools' Challenge Quiz, with the students demonstrating their understanding of mathematics and critical-thinking skills during an alternating-questions section, a speed challenge, and a buzzer face-off.

"Winning this competition has been a great effort. We've done our best, and we'd just like to say thank you to our opponents for a well-played match," said Williams. "The team was nervous during the competition, but we got words of encouragement, and that nervousness changed."

Novelette Archer-Gardner, Irwin's math teacher and team coach, praised her students' efforts and their preparation for the competition.

"I'm feeling overwhelmed and overjoyed to know that my students have performed so well and have excelled as the winners. The preparation for the competition was a bit tedious at times because they were also preparing for the Primary Exit Profile exams, but they're really hard-working students, and they did well," said Archer-Gardner.