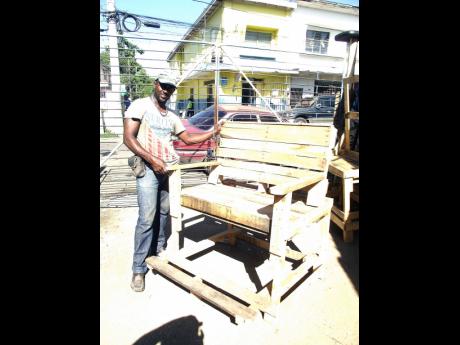 Rasbert Turner Photo 'Pallet Man' Ronald Thomas displays one of the benches he made from pallets. 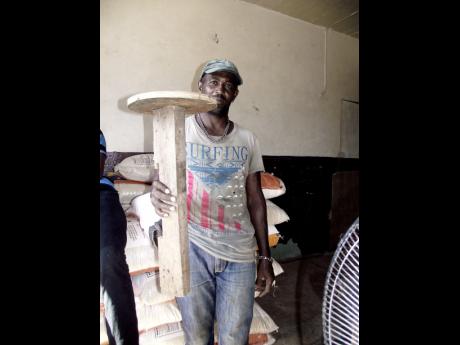 The use of wooden pallets has helped Spanish Town resident Ronald Thomas to start his own business.

Pallets are flat transport structures, which support goods in a stable fashion while being lifted by machinery like forklifts.

Surprisingly, Thomas does not have a background in carpentry.

He used to be a sound system operator and played at various events. However, he said the venture proved to be too costly. So he started working as a labourer, including working with a flour distribution company.

But he wanted more for himself.

"I was at home and see where I need some extra money. I also realised there were some pallets, and I just to pull them up, and built the first cart," Thomas said.

The enterprising Thomas sources used pallets from various wholesales in and around Spanish Town. He also buys pallets from other persons and businesses.

Using pallets to make handcarts has also spawned a spin-off venture. He told The Star that he normally rents the carts daily to vendors and sells the other items.

"My work is all over the place and it is very encouraging. My work is difficult but to be able to provide employment to others makes it worthwhile," Thomas said.

Thomas, who resides along Manchester Street in Spanish Town, said he started his venture in December 2017 and it continues to grow.

He said that with the business being near market, this has made him accessible to sellers.

"Di cart is very helpful, it is easy fi mi rent a cart and sell mi goods. A dem type of service dat help out people like me," said Orville Bender, who transports goods along the busy town.

Thomas told The Star that the aim is to increase the number of carts and perhaps get more persons to work with him on a daily basis.