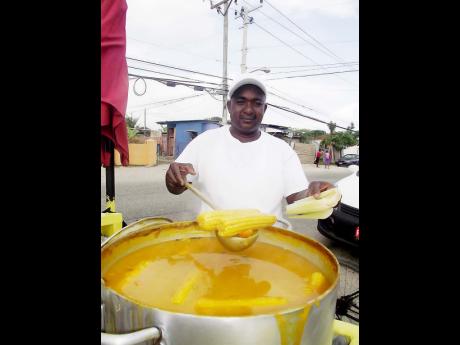 Andrew Millings serves up some corn from his soup cart. 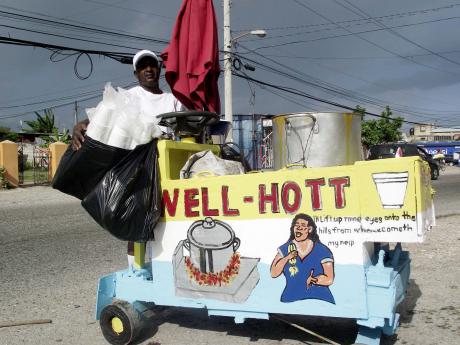 There's something for everyone on Andrew Millings' soup cart. 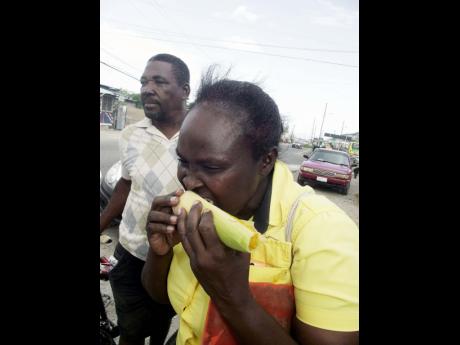 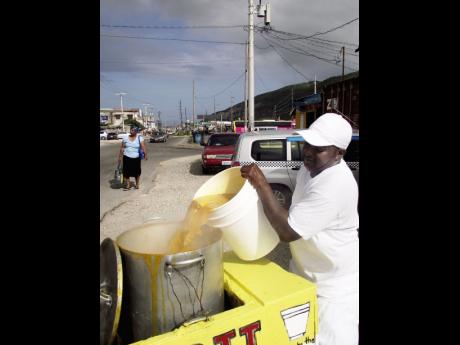 Millings prepares another pot of his delicious soup.
1
2
3
4

With more than a few food offerings in the Naggo Head community in Portmore, St Catherine, Andrew Millings is holding his own with his Well-Hott soup cart.

On a typical day, whenever one passes through the community, the crowd is eager to taste what's on offer.

Millings' colourful cart is always laden with various soups and boiled corns. Millings was born and raised in Naggo Head and still lives there.

"Is soup and corn that I have being selling more than 10 years now. All my working life, it is all I do to support myself," Millings said.

He told The STAR that he cooks chicken foot soup, peas soup, and a mixed soup with cow skin.

His customers vary from schoolchildren and public transport operators to business persons and passers-by.

From Monday to Thursday he cooks with meat, but on Friday it is vegetable soup.

He said it was a twist of fate that led to vegetables being part of his offerings.

"Di veggie soup start one Friday I come fi cook some a di usual chicken foot, but mi realise there was no money. But mi did have vegetable (carrot, turnip, callaloo and other tings). Mi couldn't buy butter, but mi did have coconut and mi jus' cook in faith," Millings said.

He told The STAR that it was a blessing, as customers clamoured to get a cup of the veggie soup.

"Since then it continue to grow, and even though the other soup and corn still a work, the customers are still loving the vegetable soup as they say it is healthy," Millings continued.

One such customer is Waynisha Dawson, who said: "Him soup dem taste good, especially the vegetable soup which him cook with peanut and coconut juice."

"It (the soup) taste good and it is convenient for me. Plus, the cart clean and he is always clean whenever he is serving," another customer, Kim Brown, said.

Millings said he takes his job very seriously and assured The STAR that he takes all precautions in preparing his soup. He even ensured he got his food handler's permit.

"I buy the vegetables, corn, meat and seasonings fresh from reputable suppliers. I have to do it that way, as my customers mean everything to me," Millings said while serving.

He told The STAR that despite other choices to dine, the soup has being holding its space and customers are showing more interest.