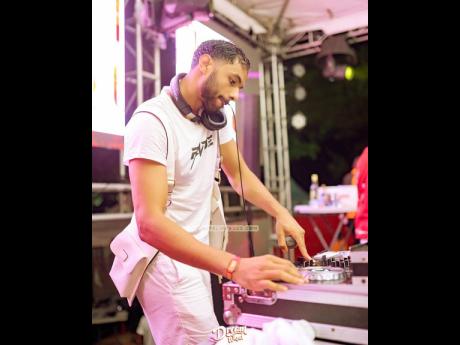 US-based disc jock DJ Fade made his Jamaican debut at the turntables at Celebrity Playground, one of the events in the Dream Weekend party series last Friday.

The DJ, whose given name is Brandon Metz, admitted that the experience allowed him to expand his musical repertoire.

"Having the opportunity to DJ at Dream Weekend was a dream come true for me. Typically, in America, I mostly DJ at some of the most exclusive parties and festivals, but they aren't heavy dancehall/reggae-based. So being able to play at Dream, I'm now able to exercise that side of me right here in Jamaica and expand my reach," he said.

DJ Fade shared that he made sure to make preparations ahead of his debut, as he wanted to deliver an authentic performance.

"Even before I was confirmed to DJ at Dream, it was always on my mood board, so I wanted to be fully prepared when my time came. I would make an effort to attend heavy dancehall events in New York where some of the biggest selectors come to play. MCs like Youngchow, Kevin Crown, Ricky Platinum and JR from Chromatic, to name a few, are who I studied from," he said.

"I don't have the Jamaican dialect down pat yet, but I do have dubs and jingles that get a huge forward and help me remain authentic. Big mistakes some DJs make is trying to put on a fake Jamaican accent and choosing not to entertain the crowd," he added. He described his debut as "one to remember" and premiered a Tarrus Riley single titled Baby Blue, for which the singer voiced a dubplate for him.

"It felt so good to play sing along tunes and hype the crowd up! Two highlights for me were playing my new song I produced with Kelly Beatz called P** P** by my artiste Yared, and playing for one of the biggest Caribbean party promoters out of NYC, Bad Indian," he said.