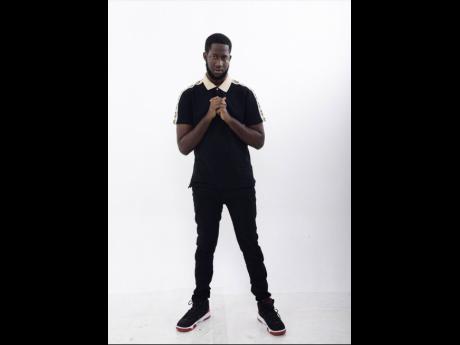 On a not-so-regular day in dancehall, there comes along a single which sways away from the cliched themes of girls, guns, money and excesses, and which gets straight to the heart of the matter. One such is Jahazeil Myrie's Keep Strong, produced by Grinch Records and distributed by Zojak Worldwide.

Chock-full of reality lyrics, Keep Strong, is a song which the 20-something-year-old - who jokes that he has gotten "more handsome" in the past few years - says was written from the heart.

"What inspired me is that I was going through a dark phase in life, and when you are going through those phases you only have one person to call upon," he told THE WEEKEND STAR.

Quizzed about his use of the word 'God', rather than 'Jah', as is the norm in these songs with an 'upful' message, the son of the 2020 winner of the Jamaica Festival Song competition, Buju Banton, had this to say. "God is more effective because I believe there is one God, and that is the Lord above. God has no different name."

Jahazeil chants in Keep Strong, "Even though the road is tough, I call upon you God

Only the Lord know what we've been through

So in these time O Lord I thank You

Nuff times me feel like me a go mad

He is satisfied with the response so far, and shared that family and friends have been very encouraging. "They are saying that they feel this to the heart," he said. He recently completed the video shoot and had a soft premiere on his Instagram page, which has been receiving satisfactory feedback. His team over at Grinch Records stated, "It's a great pleasure being a part of your journey."

runs in the family

Jahazeil was born and raised in Kingston, where he began honing his skills from the age of 16, writing and recording songs under the tutelage of his older brother, renowned dancehall producer Markus Myrie. According to his bio, his sound is a reflection of his main musical influences, his father and brother. Jahazeil is most popularly known for his breakout single Hold On, which was recorded and released in 2017. This record was followed up with collaborations with Buju Banton, Spragga Benz, Markus Myrie and Abatau.