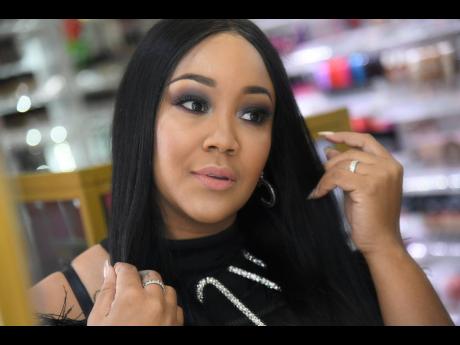 Leaving the retirement talk of 2017 completely behind her, dancehall diva Tifa has released a scorching new single that sees her returning to the lyrically potent, 'hold-no-bars' content that made her a staple in the dancehall industry. But the track, titled ' THE BEST', which was released on May 14, is being prevented from hitting its true potential. Its steamy cover art, which is a pink light switch moulded to reflect the shape of the female sex organ, has caused the song to be flagged by several streaming platforms.

Speaking with THE WEEKEND STAR in an email correspondence, the entertainer said that although the restrictions have caused some problems for her in terms of getting the song out to the masses, her team will continue to push full speed ahead with promotion efforts. "Honestly, I didn't think I would have had issues," she said when asked about the choice of imagery for the cover art. "It's a 'light switch', and I just see it as art, but apparently, some people find the image offensive and slack. My team and I are awaiting more information (on how to halt the flagging) while we continue to promote and hold on to the momentum of the song. We are also in the process of making a more platform-friendly artwork for THE BEST so that we won't have any more issues with our numbers and streams."

The entertainer went on to say that aside from the "flagging issue", the song has been getting rave reviews from listeners. She said since the song was released some two weeks ago, the support has been so overwhelming, it has fuelled her resolve to stay on the dancehall circuit even more. "It (the song) definitely has exceeded my expectations with fans and DJs alike worldwide, especially in the core dancehall market. If you check everybody's Live or Stories (Instagram) right now, you will definitely hear or see THE BEST. It definitely makes me more motivated than ever, especially during this corona time," she said.

While she continues to push THE BEST, Tifa says she has a lot in store for listeners in the near future. She says she has been using her time in quarantine to write and record and will be treating her fans to countless surprises in due time. "I can't let everything out of the bag right now, but I've been recording non-stop, and there are definitely lots of surprises to come for 2020 and beyond," she said.