Sheba explores wild side on ‘3 Some’ 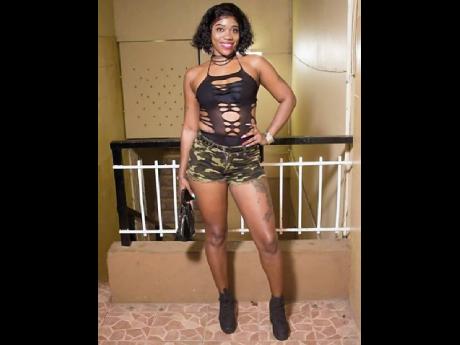 Who says three is a crowd? For Sheba, there is nothing more that turns her on than having her 'boo thang' fondle another female in her presence.

In fact, she even acts as his cheerleader, and doesn't miss out on the fun, ensuring to please them both.

At least, that is what she projects in her latest release, 3 Some, produced by Shab Don Records.

The single is climbing - more than 16,000 views on YouTube in less than one week - with some internet users expressing shock at Sheba's daring side; others are eating it up.

"I wasn't really scared of what people would say. I was more thinking of my family because they listen to my music, and I was thinking of their approval. Then I remembered that none of my family pays my bills. So I said, shoot, mi just a do weh mi feel fi do," Sheba told THE WEEKEND STAR.

Recorded on the all-female 'Sexperience' rhythm, Sheba said she had less than two days to write the song, as she got in on the project close to its release date. For the entertainer, it had to stand out.

"I've never been to that level of sexual activity in real life. As an artiste, your inspiration comes from a lot of things and I let the rhythm tell me what to write, which is how I've always been," she said. "On my way to the studio, I kept listening to the rhythm and I knew I wanted a different vibe. The rhythm is called 'Sexperience' so every female has sex as the topic, but I like to go outside the box. I thought, okay, everybody is singing about dem body good and about dem private parts. Mi never really waan be cliche, so I just thought of something different that still coincides with rhythm."

Often affiliated with Vybz Kartel's Portmore Empire, Sheba said it has been difficult getting a listening ear to her music, unless it is linked to the 'Gaza' boss. The feedback to this song is signalling a change.

"I've been doing a lot of songs over the years and dem just a fall pon stony ground cause people never did a give me a chance fi be me, dem always a tie me to Addi, so if I'm not doing something that pertains to him they don't accept me," she said. "For me to be singing for me and my own creativity and what I can do, it's a good feeling. Sometimes yuh haffi just follow yuh mind and don't second-guess anything."